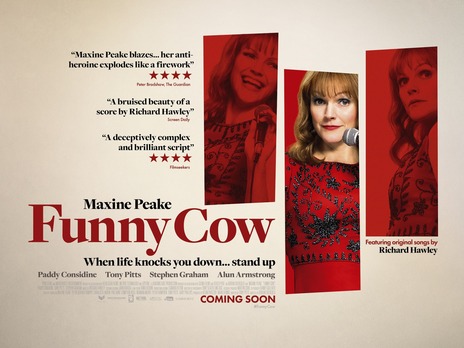 What was it like to be a female stand up comedian in the 1970s? Funny Cow tells you. And it wasn’t easy, apparently because ‘women aren’t funny’ according to male comedian played by Alun Armstrong in this gritty drama. Maxine Peake is superb as ‘Funny Cow’ – we never learn her real name. Equally brilliant is Macy Shackleton, who plays ‘Funny Calf’, Peake’s character as a child, in the streets of a northern town.

The film has some laugh out loud moments, however the comedy portrayed in the Northern working mens clubs isn’t for the PC brigade of 2018. Lookout for a few brilliant cameo’s from some well known faces when she auditions ‘to be a star’.

However, it also has some dark and disturbing moments. There’s domestic abuse, with Funny Cow being beaten by her Dad, played Stephan Graham, and by her boyfriend in later life, played by Tony Pitts who as well as putting in a great performance, also wrote the film. Lindsay Coulson, Carol Jackson in Eastenders, plays the older version of her Mum, and is rarely seen without a drink in her hand. And if that wasn’t enough, we see a character commit suicide.

My overriding thoughts are that it is a very good film, very much of it’s time of setting. There are a couple of stand out performances, but would I want to see it again. Possibly not.